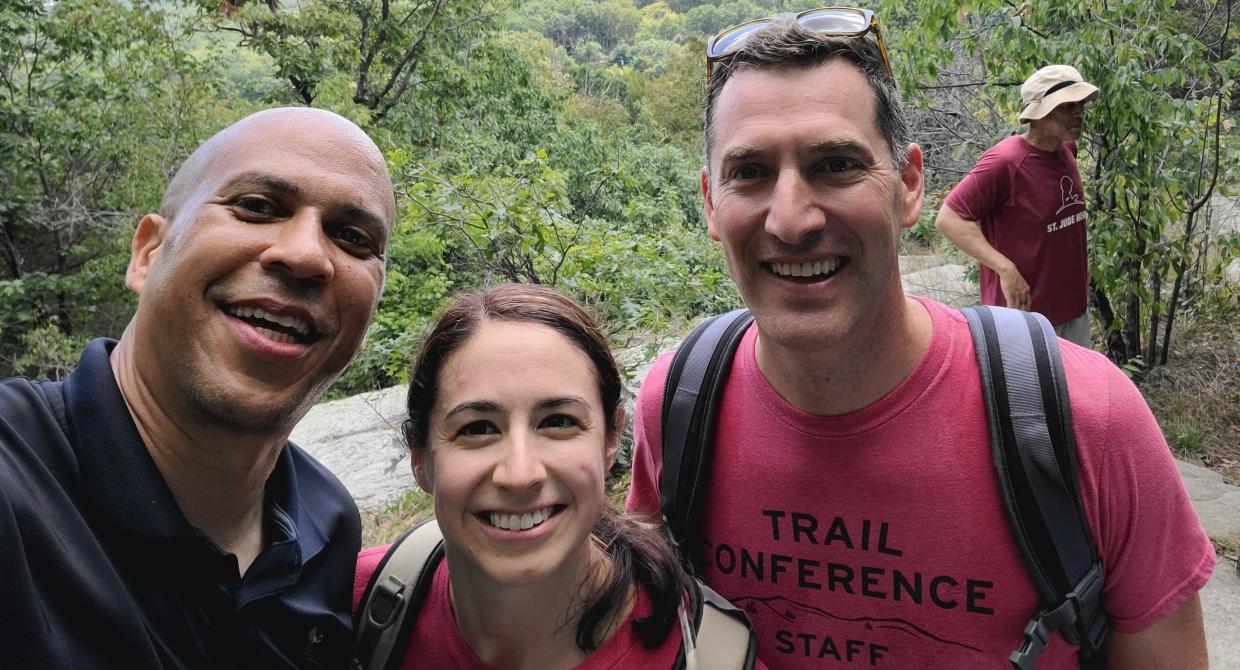 We love meeting new people on the trail. And we loved getting to show off the hard work of our volunteers and Corps members on a hike with U.S. Senator Cory Booker!

On Saturday, the United States Senator from New Jersey met up with Trail Conference Executive Director Josh Howard, Chief Financial Officer Mary Perro, and volunteer Juan Melli for a hike at Pyramid Mountain Natural Historic Area in Morris County. Several of Senator Booker’s aides, family members, and friends came along for the walk, which featured stops at Tripod Rock, Lucy’s Lookout, the reservoir, and the current worksite of our Conservation Corps crew. It was at least one person’s first hike!

Josh and Juan kicked off the hike with an introduction to the Trail Conference and info about the park. During the hike, our team pointed out the impacts of climate change on trails, spoke about our efforts to combat spotted lanternfly, and explained how our projects are mostly funded through the support of Trail Conference members and donors. The hike included a visit with our Conservation Corps crew working on trail improvements at Pyramid Mountain and throughout Morris County; that crew is generously financed by the county. The senator was very interested in the techniques and tools the crew uses and how they make decisions about where to build trails. He was impressed with the stone staircase the crew had built, which was part of the hike route, and the wild blueberry plants they helped to replant. Senator Booker was very grateful for the service of the crew’s Corps members and volunteers.

Juan and Mary showed Senator Booker how to read blazes, and Juan told him about the techniques he uses to touch up any blazes in need of care. The team shared our efforts to reblaze trails at several parks in New Jersey to create better loop hike options and positive hiker experiences. They also spoke about our Trail Stewards and Leave No Trace efforts – fortunately, they didn’t pass too much trash!

At the end, the senator handed out vegan treats for everyone to enjoy. He said he would love to go out hiking again; our team gave him a map, a copy of Trail Walker, and more information about our organization. Everyone was super friendly and had a great time.

Our sincere thanks to Senator Booker, his staff, family, and friends for taking the time to share a hike with us!